Self seeding Periwinkle, Portulaca and Celosium

Many of the Periwinkle, Celosium and Zinnia seedlings that I had planted this year, died for reasons still unclear to me, as I had mentioned in my last post. Having paid so much for those seedlings when I could have them for free, motivated me to try to collect some seeds for next year.
And while I was on the collection spree I discovered some hidden treasures in the form of seedlings of Periwinkle, Portulaca and Celosium that had self seeded from last year! These I promptly transplanted into pots where they could grow unhindered.
Here are some Portulaca and Periwinkles which have self seeded in the Croton pot. 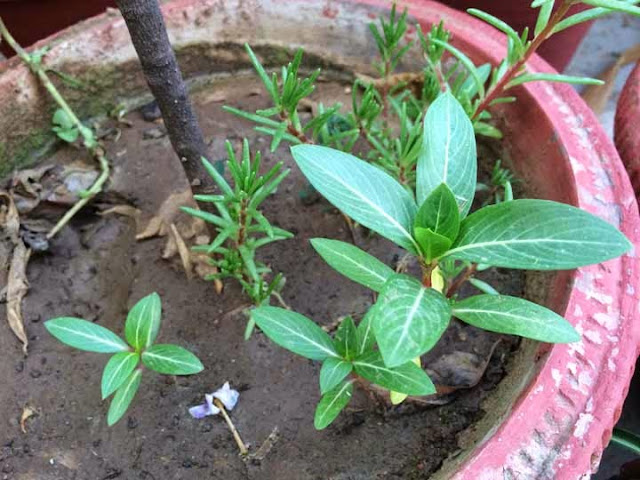 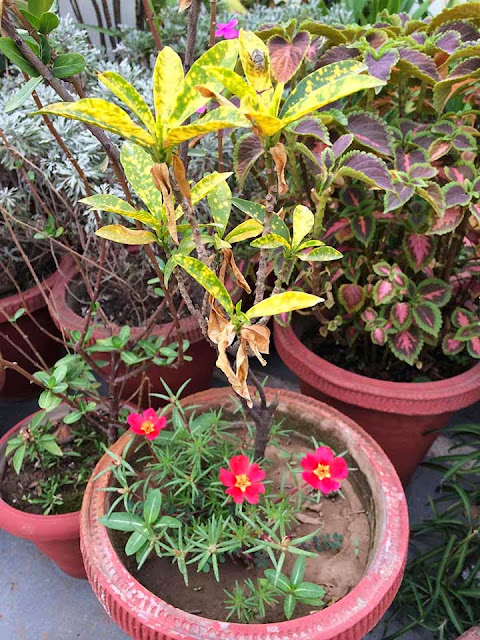 Lots of little seedlings of Celosia Plume in an empty pot. 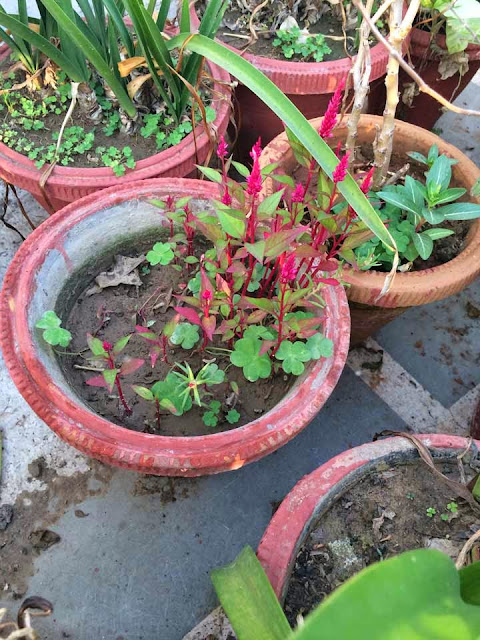 Vinca and Portulaca in my Poinsettia pot. 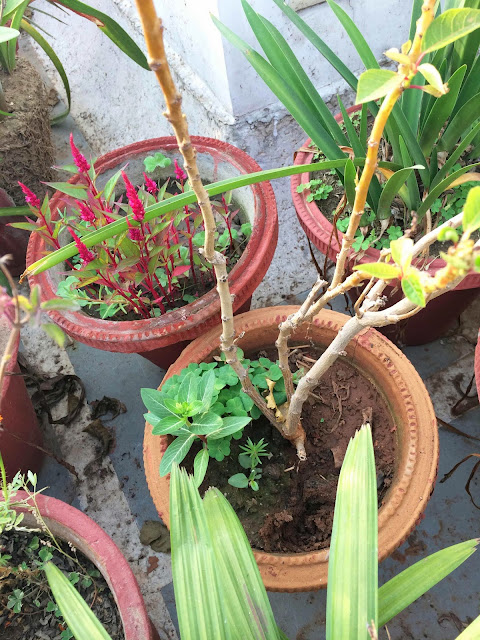 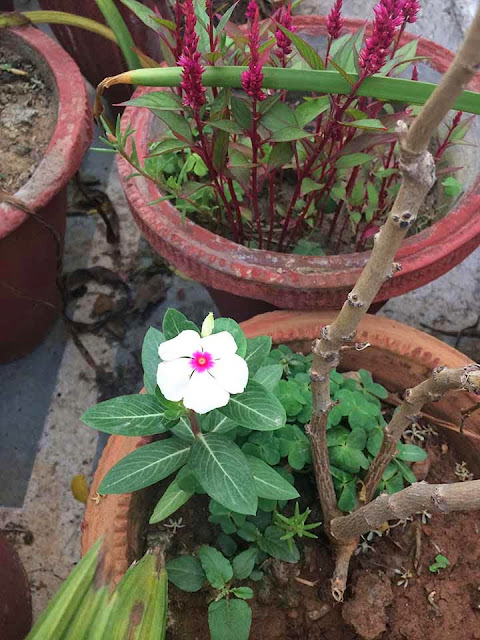 Some Periwinkle seedlings in the Tuberose container which has been lying next to the Periwinkle plant (in the foreground) for many months now. 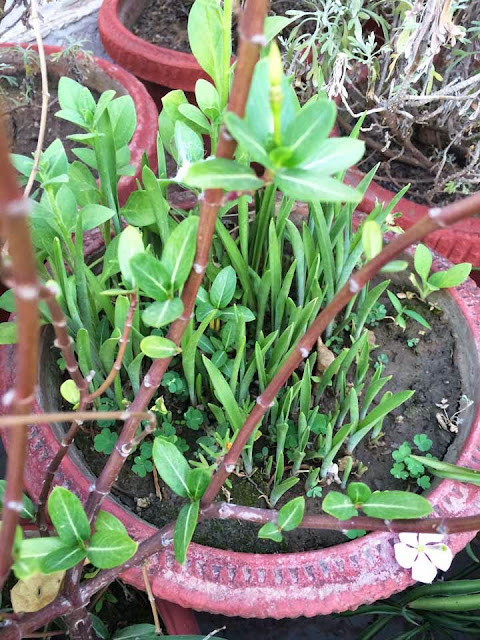 Some of the little treasures I discovered transplanted into new pots. Here, I have not yet taken out the wilted seedlings hoping against hope that they might still "wake up". 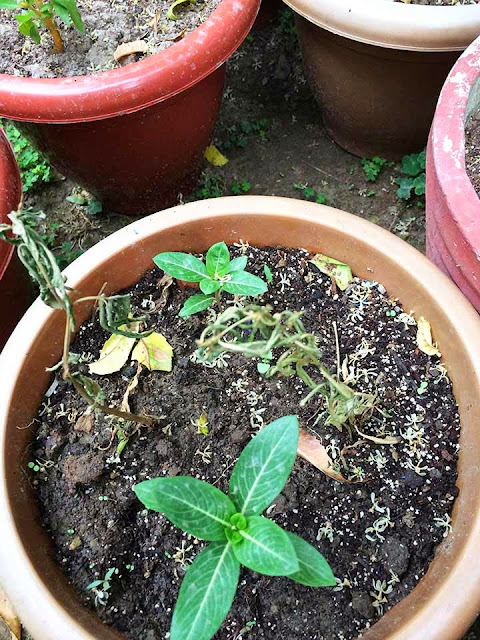 Well, this past week since I planted the summer seedlings, I have lost 6 of the Orange Celosia and maybe 8 Periwinkles. It is a miserable feeling to see your newly planted seedlings all wilted, shriveled up and ready to give up. A couple of the Zinnias too are looking like they might go either way. One of the reasons I think, might be the summer heat.
Orange Celosia 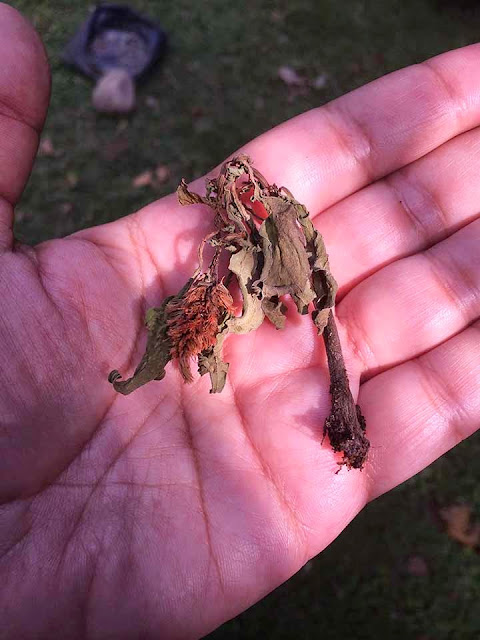 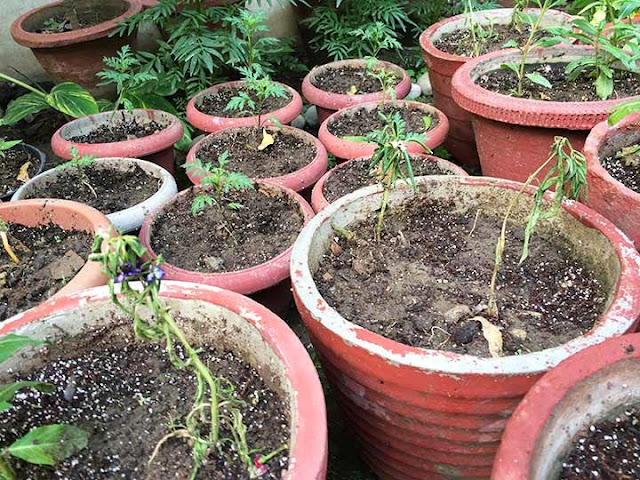 We had potted the seedlings on my terrace. That is where my compost bin and storage bin for manure, soil etc is kept. After planting them we kept them in a relatively shaded part of the terrace but the summer heat is still probably to much for the delicate seedlings.
So I visited Master Seeds at Barafkhana to replenish the Celosia and buy some pots. 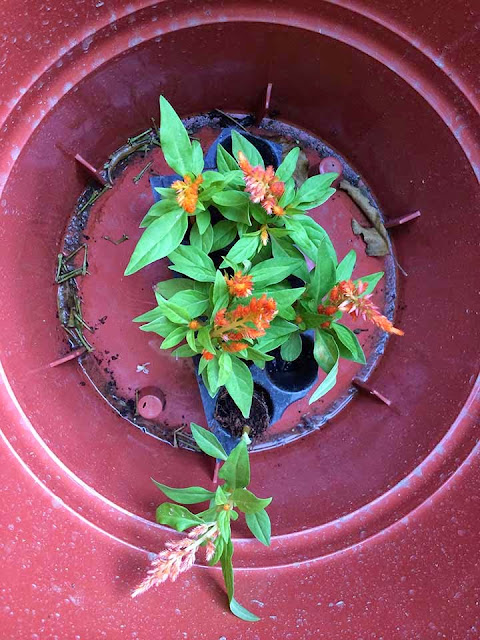 The gentleman there told me that I was probably killing the seedlings off by watering them twice a day. According to him, the seedlings and in fact all the plants should be watered only in the evenings and not more than twice a week even in the scorching Delhi heat!
As of now, I have shifted most of the pots from the terrace to the garden except the Portulaca, the Kochia grass and some Cosmos which are all still on the terrace. These seem to be the most hardy and unbothered by it all. I have also stopped watering the pots in the mornings. In fact, I plan to water them now only when they start looking distressed. The Zinnias too are doing relatively fine. 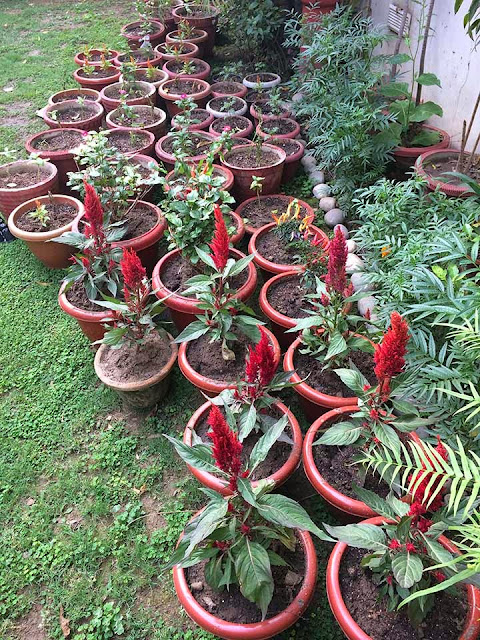 But there is a silver lining to the proverbial cloud. Losing all those seedlings gave me the push to collect some seeds for next year. And while I was scouting around for seeds on my terrace, I came across a few treasures. Some Periwinkles from last year that had self seeded and lots of Red Celosia! But thats fodder for another post.
Posted by Sujata at 2:46 PM 9 comments:

Let me show you my treasure trove from the nursery, that I got last week! I got seedlings and small plants of Celosia and seedlings of Periwinkle, Portulaca, Zinnia and Cosmos. I also got some Kochia Grass which strangely I cannot spot in the cartons below.I also bought a Coral Jasmine plant, two small Jasmine Sambacs and a Night Blooming Jasmine, all for their lovely fragrance.
I have potted the last of these seedlings today. It was quite an exercise with more than 50 pots to fill and more than a 100 seedlings to plant! 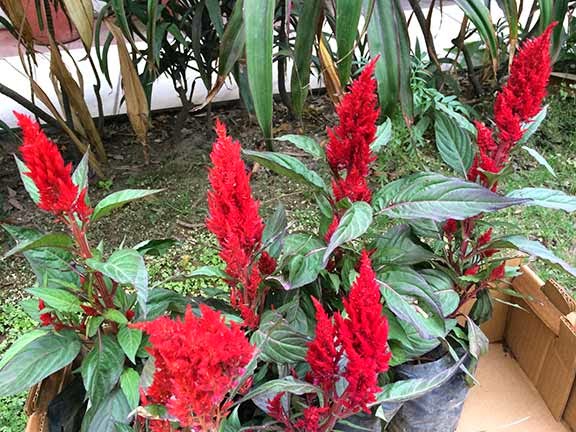 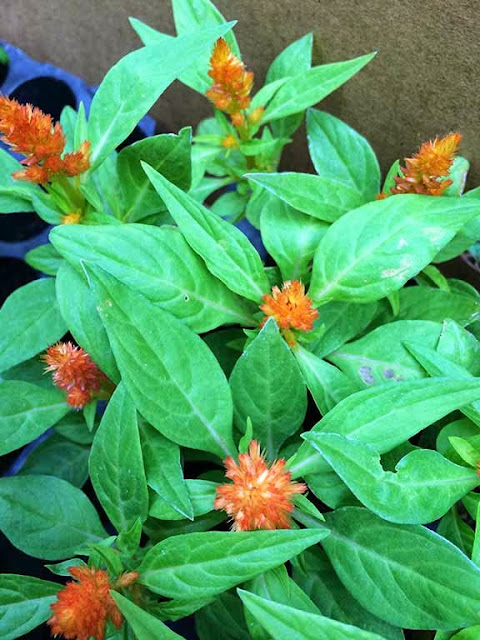 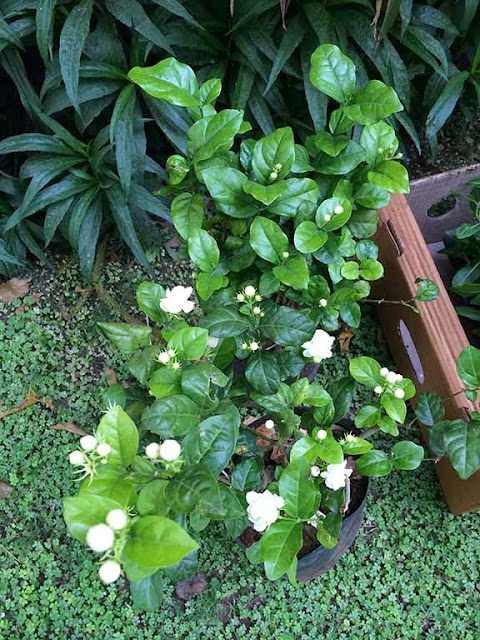 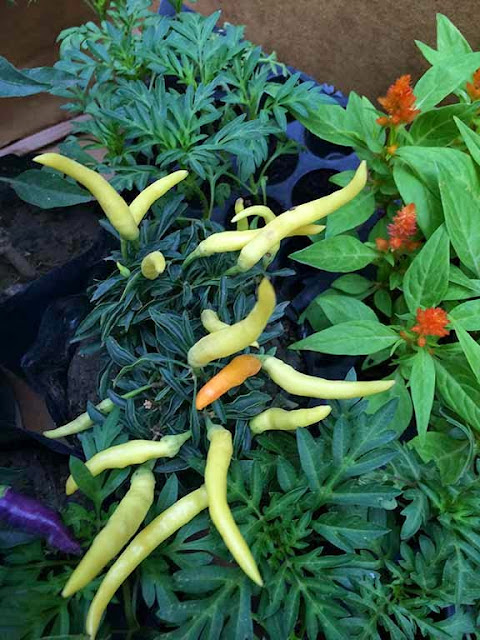 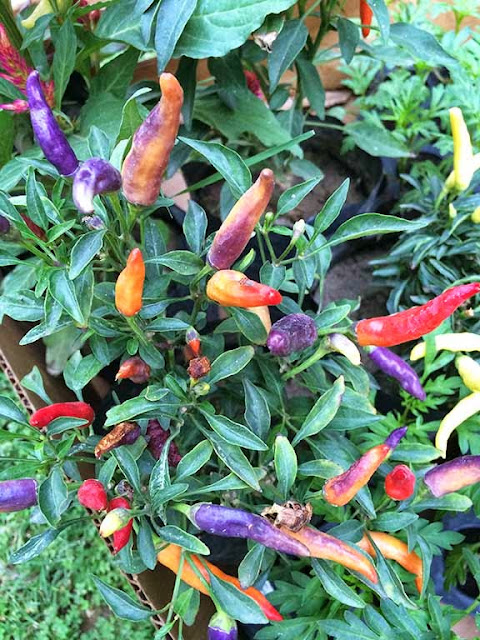 Periwinkle in the foreground 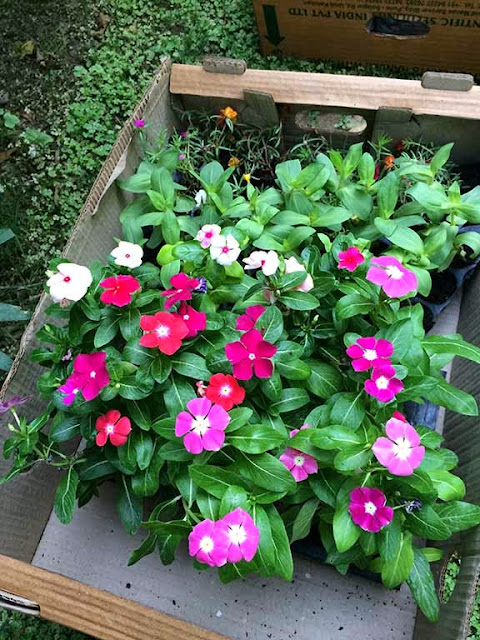 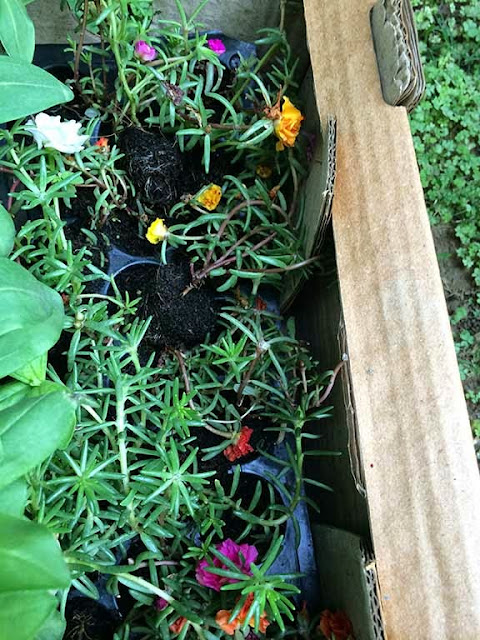 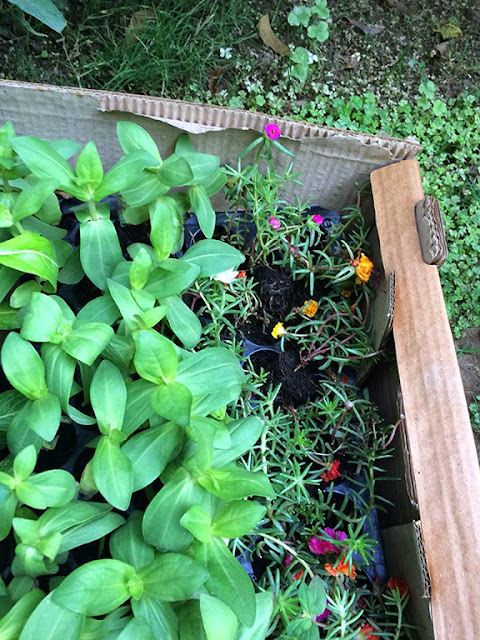